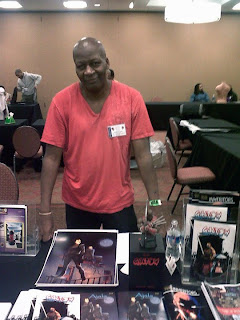 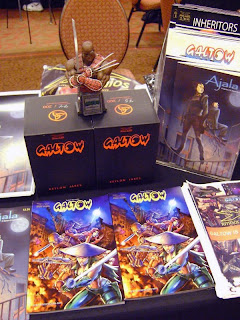 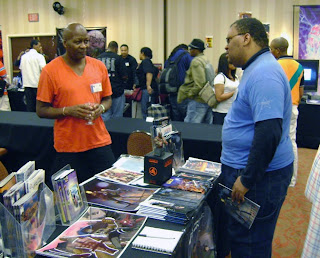 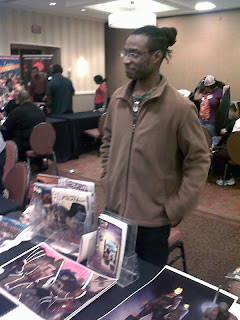 Rob G. and N. Steven Harris held it down at ECBACC in philly on May 15th. It was an awesome show and we sold out of the Galtow collected trade paper back. A big thank you goes out to all who came out to support us and ECBACC production crew. The San Diego Comic Con will be next!!!
Posted by Xmoor Crew at 4:40 AM 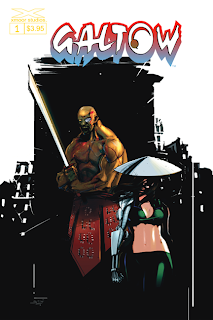 Here’s part two of more information on the books we will be bringing to ECBACC 2010:

We are re-releasing Galtow #1 for the first time fully colored! All the black and white issues have sold out and we'd like to have something to get our new readers started on. This is the variant ECBACC cover # 2 here by artist Beni Olea - Variant cover #1 San Diego Comic Con exclusive will be done by none other than master artist GREY!!! Coming real soon...

Here's a little background story info for all of our new readers -
GALTOW
Set in the year 2015, GALTOW centers upon four characters: The silent master JIYA, The massive warrior KEYLON JAKES, the flamboyant Ninja WU REYMOS, and the psychotic LADY CAFA as they fight to survive a post-apocalyptic New York. The main story takes place almost twenty-five years since the conclusion of The Second Vietnam War. The cities of the once proud United States are in constant turmoil, the result of conflicts fought over the years between the Great Clan Houses now acting as the ruling bodies after a disastrous civil uprising, from the ashes of the broken government Warrior Clans are now social classes, enlisting men and women who have embraced the codes of warriors from ancient Credos of the Ninja, Samurai, and Yakuza. Fighters from all walks of life wage violent battles in the streets hoping to gain the attention and respect of the elite fighters. Duels Known as the “GALTOWS” are fought in the great arena’s across the continent seeking the highest echelon of the martial masters… these warriors will go to any length to become a GALTOW master, including genetic enhancements, and cyber augmentations. . For to rule the GALTOWS is to be a living god on earth.

We will also have the GALTOW Trade book of issues 1-4: 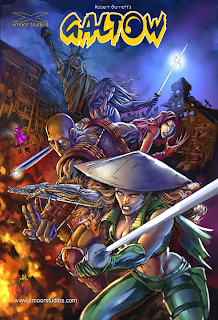 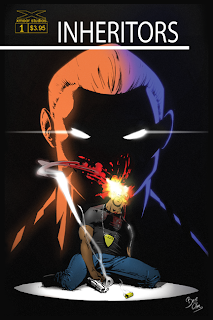 There use to be heroes… Men and women, who could fly, could bend steel… Some you could not see with the naked eye…
Champions of justice that fought evil for over three decades… The Captain, Black Eagle, Damsel, and the Fury. From 1940 thru the 1970’s they were members of the Light Brigade: America’s Champions… It’s just that no one remembers that they ever existed; no one remembers that there were ever any heroes; no one recalls an age when people ascended the imagination… No one remembers the worlds super powered beings --- There were never any paranormals… Or so they would have you believe.

Inheritors is planned as a six part mini-series with an open end potential.
Beginning as a not so simple case for a highly decorated undercover Detective Jude Jefferson, who’s on a personal mission to apprehend a serial killer, explodes into an international cover-up involving global genocide of an entire paranormal generation. Detective Jude Jefferson has discovered that super rich financier Jordan Fincher, who will soon be sworn in as the Mayor of New Hope City is involved in several ritual killings of young women around the city. Jude has a vested interest in seeing Fincher brought to justice. The two men were once the best of friends, childhood buddies until Fincher tried to rape his girlfriend/ now his wife in their college days.

Hope to see you at ECBACC in Philly this Sat...
Posted by Xmoor Crew at 5:21 PM

As we get ready for the upcoming ECBACC 2010 Convention Sat May 15th - http://ecbacc.com/wordpress/
I wanted to drop some images from some of the books we will be bringing to the show starting with the long awaited colored and lettered AJALA #1 written by myself Robert Garrett and illustrated by the illustrious Steven N Harris (http://nstevenworks.com/2005/).
Take a look at this slamming cover by Mr. Harris and colored by the
dynamic Mshindo (http://mshindoiart.com/) - 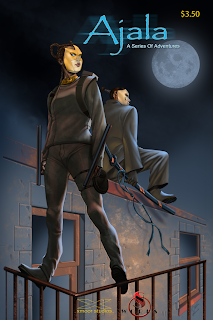 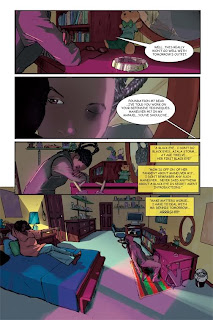 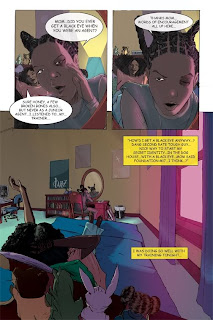 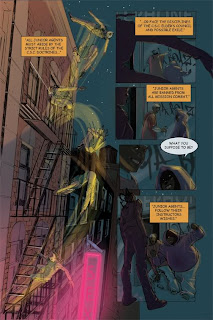